In North America, BMW has done away with its diesel engine offerings due to lower demand and tighter regulations, opting to focus more on hybrid and electric cars. However, if you’re a fan of the diesel engine you’re in luck because BMW produced a variety of models in the popular BMW Series 3 and 5. There are six diesel models that were a part of the BMW Series 5 F10 model lineup: 518d, 520d, 525d, 530d, 535d and 550d.

If you’ve got your heart set on a diesel engine, there are plenty of models to choose from. And these diesel models offered other choices for customization, like engine size and rear-wheel or all-wheel drive. Finding one on the used car market shouldn’t prove too difficult if diesel is what you’re after, but because BMW began phasing them out a couple of years ago, you’ll have to keep a keen eye out and be patient if you’re looking for a specific model. Look for the “d” in the model name, as it lets you know that that particular BMW model is diesel.

The BMW Series 5 is a great option for those who are looking for both luxury and performance, and if you choose to make yours a diesel, then you’ll reap the benefits of a heavy-duty engine that is also fuel efficient.

Let’s dive into the BMW 530d and 535d xDrive, and what you can look forward to and what to be watchful for in terms of issues consumers have noted about these particular models.

Diesel engines were popular in North America in the 1970s and 1980s when automakers were producing vehicles with diesel engines consistently. For some automakers, diesel accounted for more than 50% of their auto sales. BMW offered its first diesel car in the U.S. in 1985 – the 524td, which was the most powerful and fastest diesel vehicle of its time. By the mid ‘80s, fuel prices were rising, so consumers were not as interested in the diesel engine as they once were, making the 524td short-lived. BMW only made two model years – 1985 and 1986.

Known for its innovation, BMW didn’t let its first entry into the diesel market bring it down. Over the next few years BMW’s engine development specialists made enhancements to its diesel engine which increased power and performance, while reducing fuel consumption and emissions in the process. Throughout the years, BMW continued its innovation trend resulting in some of the best diesel engine offerings in the luxury sedan class.

Great fuel economy – The BMW Series 5 F10 diesels will get you 26 mpg in the city and an impressive 36 mpg on the highway.

Better range – If you don’t like stopping at the pump, the F10 diesels will have you getting gas less often. You can get more than 600 miles out of just one tank of gas if traveling via highway and nearly 450 miles in the city!

Quiet engine – The loud rattling and rumbling of older diesel engines is no longer an issue in the BMW diesel models. They are quiet; you wouldn’t even know it was a diesel.

Powerful and heavy duty – Diesels offer more power, which is why they are so often used in big trucks. They are heavy duty engines that can haul a lot of weight.

Responsive – BMWs equipped with a diesel engine are responsive to the driver in terms of handling, braking and steering, allowing you to take those highway curves with precision and grace.

Clean – Say what? Technology has virtually eliminated the smoke and noise that have become synonymous with the diesel engine. Don’t be surprised when your diesel’s exhaust pipe is just as clean as a regular non-diesel engine.

Common Problems to be Aware of

As with any make and model, there will be pros and cons. Below are some issues you may encounter with the F10 diesel models: 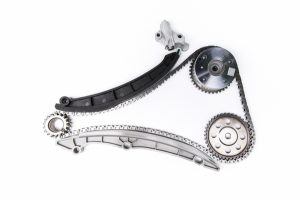 Timing chain failure – Worn or faulty timing chains have been reported by consumers. A bad chain can result in a rattling noise, or worse, no noise at all and can cause your engine to stop. Sometimes the engine can stop when you’re driving at high speed, which can be very dangerous and a major safety issue. Unfortunately, the faulty chain is not something you can replace or change out as a preventative measure without having to remove the entire engine which can be very costly.

Sticky waste gate springs – These springs can get stuck in the open position or not properly close and lead to inefficient fuel economy, reduced fuel boost due to boost leakage, causing the car to drive sloppily.

Carbon buildup – This buildup will cause the clogging of the exhaust gas recirculation valve, better known as the EGR valve and cause the vehicle not to run properly. You may notice some stalling or idling problems as a result. This carbon buildup and clogging can also result in plugging up much of the intake piping too, which can lead to an expensive repair. In many cases the buildup can get into the engine heads, which will further aggravate the problem and require a proper engine cleanup and necessitate removing all the engine heads. Unfortunately, removing those heads can be expensive and once they are unsealed and resealed, they don’t seem to be quite as good as the original seal.

Broken vacuum lines – These vacuum lines tend to wear, resulting in breakage. There are lots and lots of small vacuum lines under the engine compartment, each responsible for something different. The labor and troubleshooting costs can be expensive because the mechanic has to get into the engine and test out each line to see which one is causing the issue. In many cases, the broken line may not be easily detectable.

Glow plugs – It’s unfortunate, but rather common for the glow plugs to fail in these diesel cars. While glow plugs are not that hard to change out, the issue arises if the ceramic top of the glow plug breaks off. This piece may not snap off, but there is a big chance that it may because they are small and delicate parts. If that ceramic part of the glow head comes off, they will most likely fall into the engine. If this happens, they must be taken out. And in order to do that, the engine needs to be removed and taken apart, which can leave you with a hefty bill.

When replacing the glow plugs, be prepared that the repair shop may ask you to sign a waiver that states that there may be additional costs beyond changing out the glow plugs. If pieces of the glow plugs end up in the engine, the engine will need to be removed and taken apart to fetch those pieces before the plugs can be replaced.

Faulty Urea tank heater – Urea is the diesel exhaust fluid (DEF) that is used in diesel engines to reduce the amount of air pollution created by the diesel engine. It’s a common failure for the Urea tank heater to fail and could result in the tank freezing, leading to your Bimmer not operating. If this happens, you will get an engine code to warn you. This is most common in climates where the temperatures fall below zero degrees.

Clogged DPF – The Diesel Particulate Filter (DPF) is the biggest and most important filter in the car. It collects all the debris that is coming from your vehicle’s exhaust system. It’s been known to clog up and cause issues. In order to repair this, a mechanic needs to take apart the exhaust system which can be very expensive for both parts and labor because it has to be manually removed for it to be cleaned.

Diesel cars that are only driven 5 to 10 miles at a time are in the most danger because these short trips allow lots of carbon to get into the intake, which can lead to the clog. The DPF cycle needs to burn through a full cycle, and the only way to do this is by taking your car for longer drives to allow itself to clean out.

Cold weather starting – Cold weather is harder on the diesel battery because when you start a diesel car, the glow plugs are engaged. Glow plugs suck a lot of battery juice, but they are important because they heat the fuel and encourage efficient fuel combustion. It’s this combustion that is needed so that you can drive off. So, when it is colder outside, the glow plugs need to work harder, drawing even more energy from the battery. If it is really cold outside, like below freezing, you may experience the car not even starting.

Pro Tip – Outfit your diesel vehicle with a strong battery that is made specifically for cold weather, especially if you live in a climate where the temps may drop below zero degrees consistently during the winter season.

Owning a BMW with a diesel engine has its pros and cons, so to round out other factors to consider, let’s explore reliability. The BMW Series 5 diesel models, 530d and 535d, come with the same offerings that make the BMW Series 5 a popular choice for many consumers, but the diesel engines pack a 6-cylinder turbo diesel engine. As we noted, there are some great advantages to the BMW modern diesel engine.

Unlike the diesel engines of the past, today’s diesel engines are very well made and require fewer maintenance needs. In the 530d and 535d, BMW did it again by offering a well-built engine that is diesel.

While the engine may be well-built, Consumer Reports still gives it a “below average” reliability rating overall for the 2014 model year. The 2015 and 2016 models got better in terms of reliability as time passed, earning an “average” and “above average” for the 535d model years 2015 and 2016, respectively. So, while you may save money on fuel costs, you may have more upkeep beyond maintenance, which is not uncommon when it comes to BMWs and not specific to the F10 diesels.

So, if reliability is a top factor for you, then the diesel options may not be the best fit for you – you may want to stick with a mainstream petrol engine which BMW offers many options. But if you’re wanting an engine that is powerful and aggressive, and reliability is not a top consideration, then it may be for you.

Get Peace of Mind – Get olive

If you’re driving around in a BMW diesel model or thinking of purchasing one, be sure to protect that diesel engine with an “extended car warranty” solution from olive.

olive offers Mechanical Breakdown Insurance plans in case of an unfortunate breakdown. Get a quote online today and be covered tomorrow. Here are some of the benefits you can look forward to:

Our products, customer service and reputation for excellence have earned us an A+ rating with the Better Business Bureau, and we have partnered with some of the insurance industry’s largest companies to back us.